Drew Dollar finished 24th in the Rackley Roofing 200 at Nashville Superspeedway after starting from the 20th position. Kyle Busch returns to the No. 51 Toyota Tundra next weekend at Pocono (Penn.) Raceway.

Drew Dollar, driver of the No. 51 Sunbelt Rentals Tundra for KBM

How was your day?

“Our Sunbelt Rentals Tundra was pretty good all night. I just worked on learning, getting all the laps in and being conservative throughout the entire race. We worked back and forth on handling. I feel like we started a little free and then got a little tight and went back to a little free. Overall, I learned a lot, and it was good to get all the laps in. There will a lot of positive takeaways for the next one as I learn how to drive these Tundras.” 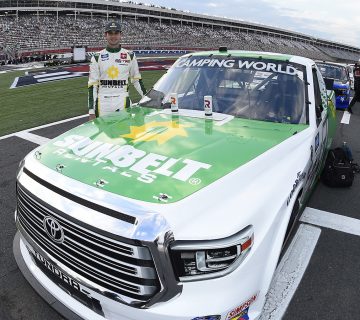