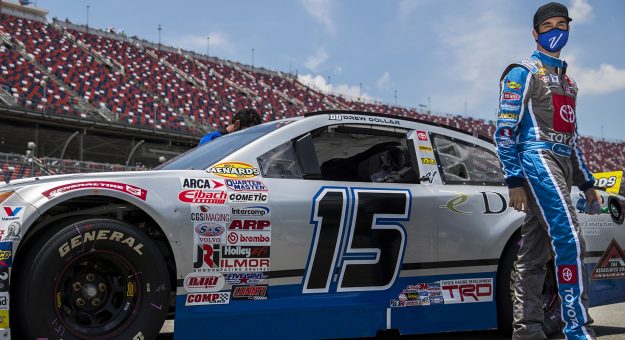 It was a breakout performance for Drew Dollar (No. 15 Lynx Capital/Dollar Concrete Toyota) on Saturday as he drove to his first career ARCA Menards Series victory on the sport’s largest stage, the 2.66-mile Talladega Superspeedway. Dollar and his No. 15 Venturini Motorsports team took command of most of ARCA’s special awards in the process, solidifying Dollar’s place as one of the drivers to watch over the remainder of the 2020 season.

While a brief practice session was held for the General Tire 200, the starting lineup was set by owner points from the 2019 season, making Ryan Repko (No. 20 McLain/Craftsman Toyota) the General Tire Pole starter. The Venturini Motorsports No. 20 team won the owners’ championship a year ago, bolstered by six wins from drivers Harrison Burton and Chandler Smith.

Dollar started on the outside of the front row and got the jump on Repko, putting him well on his way to leading the most laps for the afternoon. The 42 total laps led gave Dollar the nod as the Valvoline Lap Leader, but a coordinated move by Riley Herbst (No. 18 Monster Energy Toyota) put the Joe Gibbs Racing driver out front just in time for the scheduled competition caution at the midpoint of the race. The shrewd maneuver earned Herbst the Richmond Water Heaters Halfway Leader award and he led 34 laps of his own, trailing only Dollar in that category for the day. Ty Gibbs remains atop the yearlong lap leader standings with 122 laps led, all coming at Phoenix in March. Michael Self (No. 25 Sinclair Lubricants Toyota) still holds second with 61 laps led, while Dollar and Herbst now slot in at third and fourth, respectively, in the standings.

Herbst joined teammate Ty Gibbs, the halfway leader at Phoenix, as well as Alabama’s own Bret Holmes (No. 23 Holmes II Excavation Chevrolet), the halfway leader from Daytona, as the first three winners of the Richmond Water Heaters Halfway Leader award for the season.

With the dramatic victory coming in just his fifth career start, Dollar was the Bounty Rookie of the Race and closed to within two points of leader Hailie Deegan (No. 4 Toter Ford) in the Bounty Rookie of the Year standings. Deegan finished seventh at Talladega and leads Dollar by a narrow margin of 116-114 points. Tanner Gray (No. 17 Ford Performance Ford) is a distant third with 100 points.

Thad Moffitt (No. 46 Richard Petty’s Performance Plus Ford) was given the tall task of having to start shotgun on the 21-car field, a potential serious handicap at a draft-dependent track like Talladega. Nonetheless, Moffitt crossed the line in sixth at the end of the race and was named the K&N Filters Hard Charger for improving the most positions over the course of the event.

As both Michael Self and Hailie Deegan finished on the lead lap once again at Talladega, the duo remain tied for the lead in the S&S Volvo Laps Completed standings as the only drivers that have completed all 306 laps run this season. Drew Dollar, who finished one lap down at Phoenix, is in third with 305 laps.

The next race for the ARCA Menards Series will be the General Tire #AnywhereIsPossible 200 from Pocono Raceway on Friday, June 26. The race will serve as the third leg of the General Tire Superspeedway Challenge. Live television coverage will be carried by FS1 beginning at 6:00 Eastern.